Wrestling girls enjoy facesitting on each other

Mistress Mariella and mistress Madison love to facesit. And since they did not have a slave to facesit on, they chose to do it on each other. They played a game and whoever lost would have to endure being facesat on by the other. They both won and lost in equal measure and it was great as they enjoyed themselves. They took that chance to bite each other in the pussy and on the clit and that was how they had their first girl on girl experience.

Mistress Natasha does not like slaves who are lazy. Her new slave was and as soon as she noticed that, she knew she had to put an end to it or else she would have to do his work for him. She could not do that so she sat on his face as she found him lazily sleeping on the couch instead of doing the chores she had given him.

This mistress wanted her slave to go away away but she did not want to do so openly. She wanted him to do it himself. She wanted him to quit as opposed to her sending him away. So she used her sexy ass to facesit on him. She choked him and she made him lick her ass and smell her farts. She did it over and over again till he ran away. 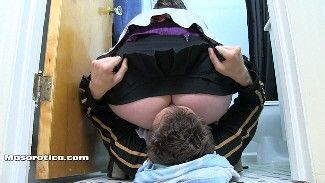 Mistress Amanda Rey is in the habit of using her ass to punish. She likes how she is able to do many things at once when she uses her ass to punish by facesitting. Today she put on her make up while she was facesitting on her slave. She also got him to lick her ass and she wiggled her clit on his face and she had fun with it till she came.

Madame Marissa wanted to show her slave that she was not what he thought she was. She could tell that he did not think she could hurt a fly. She had let him do what he wanted so as to observe him, and she did not like what she saw. It was time to change things so she facesat on him, she trampled him and she rode him like a pony.

Madame Svea has a nice figure and a nice ass. She gets a lot of male attention as a result and she likes to use it for her own selfish needs. She likes to turn on guys by flirting with them and then getting them to smell her ass. She gets them to do this by facesitting on them. This guy fell into her trap today and she enjoyed sitting on his face and having him lick her ass.

Mistress Gaia and mistress Aspasia caught this guy trying to shoplift from their store. They did not like people who did that sort of thing and they preferred those who went and told them why they wanted a pair or two of something. He had messed with the wrong mistresses and he had to be punished. The mistresses used their facesitting fetish to teach him a lesson. He was made to lick and smell their asses and he was also choked.

Madame Madison facesits on slave to teach him a lesson

Madame Madison wanted to show her slave who he was playing with. She choked him using her thighs. She also facesat on him and she degraded him cruelly. He was humiliated and in pain as she sat on his face. She choked him in the process as he could not breathe properly. His nose and his mouth were both covered and he had to beg her to let him go.

Mistresses torture loser by facesitting on him

Mistress Joss and her friend Stella like to have fun at the expense of losers. They met this loser near their place and they had a lot of fun humiliating him. They made him lick and smell their asses. But that was not all. The mistresses also crushed his balls by sitting on them and also knocking them gently with their bare feet. He was humiliated and in pain while the mistresses had a lot of fun.

Mistresses bet for chance to facesit

Lady Betty and her friend lady Bertie are competitive. None of them likes to lose. So it always means that they settle their differences with bets. Today they had a bet and whoever won was allowed to facesit on the loser. Mistress Bertie won it and she had fun facesitting on her friend and making her lick and smell her ass. She even farted on her friend and naughtily made her smell her farts.